IMAGE SALES CONTACT/IMATGE A LA VENDA CONTACTAR tonivilches@tonivilches.com o 629 300 963..October, 25th, 2009. HUMAN TOWERS MEETING IN SANT NARCIS FESTIVITIES IN GIRONA CITY CATALUNYA CATALONIA.SPAIN.."Castells" -is a Catalonian word that means castles- they are a cultural phenomenon particular to Catalonia and consist of erecting human towers. This tradition originated at the end of the 18th century in Valls, Tarragona, when rival groups of people called "colles", began to compete in constructing the different kinds of human towers that we recognise nowadays. There are three definite parts to a castle; the "pinya" or base the "tronc" or trunk and the "pom de dalt" or the crown of the castle. The "pinya" is the horizontal base of the construction on which all the accumulated weight rests and is used to stabilise and strengthen the erected structure, as well as softening or breaking the falls if any should occur. The vertical structure perpendicular to the pinya is the trunk and consists of a certain number of people on each storey, varying from 1 to 9 people depending on the castle and this also gives us the name of the castle. At the very top of the castle are the "canalla" or "anxaneta", and they make up the "pom de dalt", the crown of the castle, and because they are more agile and light-footed they are the ones in charge of climbing to the very top. One or two supporting structures can be built on top of the "pinya" if the castle is very high. The one directly on top of the pinya is called the "folre" and the one on top of that is the "manilles". So the folre is at second level and the manilles at third level height with respect to the ground. Every person who takes part in the building is called a "casteller" -castle-maker". 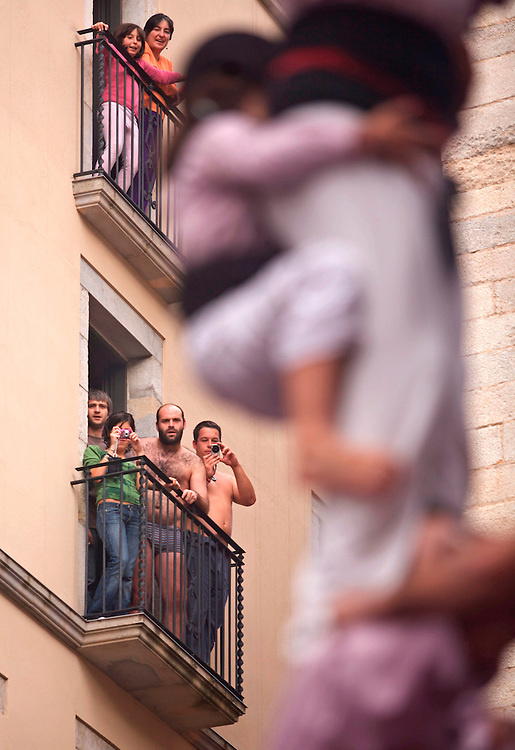